You are here: Home / MidEastGulf / Syrian-Kurdistan border: Turkey amasses troops for another operation against the Kurdish forces 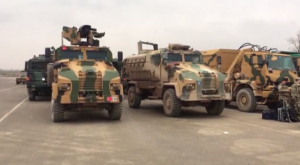 Turkey has deployed more troops to the borders of Syria where it is threatening to carry out a new military operation against the Kurdish forces, like reported by basnews.com.

Turkish media reports said the country’s army has begun supplying arms and ammunition to the Syrian Islamist rebels which are aligned with Ankara. Additional troops have also been sent to the southeast borders of Turkey.

“Moving to a state of complete readiness now needs only a short period before any military operation is declared,” Maj. Youssef Hamoud, a spokesperson for the Syrian National Army (SNA), was quoted by Reuters on Friday.

The new operation would target the areas under the control of the Syrian Kurdish forces and the US-backed Syrian Democratic Forces (SDF).

Turkish President Recep Tayyip Erdogan previously threatened to conduct a new operation against what he calls “terrorist organizations” in north and northeast Syria.

After meeting US President Joe Biden in Rome last weekend, Erdogan said: “When it is time to carry out an operation, of course an operation will be done. There is no stepping back from that.”

However, the Arabic Service of Sky News on Thursday cited an unnamed official from the US Department of Defense as saying that “the Biden administration will not allow Turkey to threaten our Kurdish allies.”