You are here: Home / MidEastGulf / Syrian Kurdish forces capture most of rebel-held former military airport near the border with Turkey 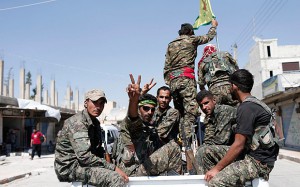 The Syrian Observatory for Human Rights said heavy fighting took place between Kurds and Syrian insurgents around Menagh airport and Russian warplanes staged at least 30 raids against the rebels holding out there.

Rebels say the Kurdish YPG militias have been taking advantage of their preoccupation with fending off a Syrian army ground offensive launched last week in the northern Aleppo countryside to gain ground in the area near a main border crossing with Turkey.

Kurdish fighters based in their stronghold in the city of Afrin, south of rebel-held Azaz, have grabbed a string of villages that rebels have been forced to evacuate to confront advancing Syrian troops coming from the south.

Russian bombing had allowed Syrian troops supported by Iranian-backed Shi’ite militias to reach almost 25 km  from the Turkish border, the closest they have come in more than two-and-a-half years.

This allowed them to rupture a main rebel supply line between the border and portions of the city of Aleppo which insurgents control. The army with the help of its allies is now seeking to regain full control of what was once the country’s most populous city.