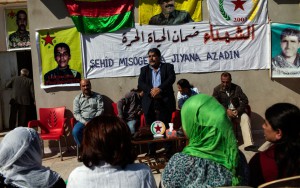 The pair met in Paris on Friday, where they discussed the treat posed by Islamic State (IS) and ‘other terrorist organisations’, and Russia’s entry into the conflict in Syria. The Russian Ria Novosti agency reports that Muslim has previously expressed support for the intervention, and President Vladimir Putin has praised the Kurds as being the only effective force against IS, aside from the Assad regime.

Whilst the PYD stands to benefit from Russia’s support, they remain uneasy about its alliance with Damascus. Senior official Ilham Ehmed told Al Monitor on Thursday that the move is both “a good step in the fight against terrorism but is also empowering the regime, which is a bad point.”

Ehmed also decried the porous Syria – Turkey border, describing their northerly neighbour’s involvement as “very bad”. Turkey has made it clear that it does not support Russia joining the war, reiterating its position that the PYD are terrorists supported by the Kurdistan Workers’ Party (PKK). The Ankara government has long supported the uprising against the regime of Bashar al-Assad.

The PYD is also supported by the US, with the White House claiming that Russia is not targeting IS, but rather fighters of the Free Syrian Army that it has trained and armed, and who oppose the regime.