You are here: Home / MidEastGulf / Syrian Kurd forces have ‘plans to liberate’ Syrian border town of Jerabulus for stop foreign volunteers crossing over to reach ISIS 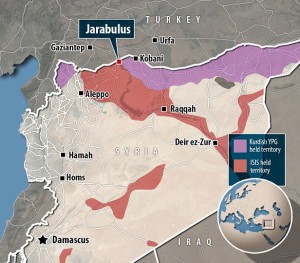 ISIS extremists are on the verge of losing their stream of foreign volunteers after it emerged Syrian Kurds are preparing to capture the last Turkish border crossing point held by the Islamists.

Officials in the Kurdish enclave Kobani say they ‘have plans to liberate’ the town and that it would be ‘in coordination with the US’.

The Independent quotes Idris Nassan, a foreign affairs vice-minister in Kobani, as saying Jarabulus was ‘the last Daesh [Isis] border crossing with Turkey.’

The Kurdish YPG (People’s Protection Units) is continuing its bid to seize border territory after capturing the town of Tel Abyad in June.

Its forces drove ISIS away from the frontier in an advance backed by US-led air strikes.

The newspaper reports that the fall of Jarabulus could further isolate ISIS – and make major inroads in driving down the number of foreign fighters crossing over from Turkey in recent years.

In July, the Kurdish militia captured the town of Sarrin, close to Jarabulus on the Euphrates river, which crosses the 550-mile border with Turkey further north.

At the time, the Syrian Observatory for Human Rights said the town had been a launchpad for Islamic State to wage raids on the Kurdish-held town of Kobani further north at the border with Turkey

While YPG forces have advance deep into Islamic State’s territories, it has also concerned Turkey, which is worried the expansion of Kurdish sway risks inflaming separatist sentiment among its Kurdish minority.