You are here: Home / Europe / Syrian jailed for 10 years on terrorism charges over Hungary border riot

A Hungarian court jailed a Syrian man for 10 years Wednesday for allegedly inciting a border riot by migrants last year, ruling it an “act of terror” and sparking outrage from rights groups 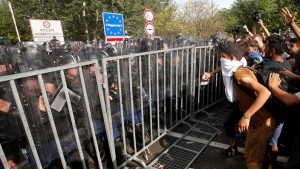 Ahmed H, who has been in custody for over a year, will have to serve two-thirds of his sentence and be expelled from Hungary following his release, said a judge in the town of Szeged, 160 kilometres (100 miles) south of the capital Budapest.

Prosecutors had initially demanded he serve 17-and-a-half years in jail.

Authorities accuse the 40-year-old of using a megaphone to stir up violence when several dozen migrants tried to cross into Hungary from Serbia on September 16, 2015, a day after the border was sealed with razor wire.

Some threw stones, sticks and bottles at the Roszke checkpoint, near Szeged, while Hungarian riot police used tear gas and water cannon to force the group back onto Serbian territory.

The incident left around 15 police and 100-150 migrants injured, including women and children.

“In order to cross the border illegally…, the man committed a violent act of coercion against persons of a government agency amounting to the crime of an act of terror,” said a prosecutor in a closing statement.

Human rights group Amnesty International slammed the verdict, saying the prosecution’s case had been based on “incredibly vague” evidence.

It represented “some of the worst trends we’re seeing in Europe: overly broad ‘terrorism’ definitions and their absurd use, and the dismissal and rejection of refugees,” Gauri van Gulik, the organisation’s deputy Europe director, told AFP.

Ahmed H. admitted crossing the border illegally but said he only wanted to take his father and partially blind mother to Germany from Syria.

“I was trying to help my family…I used the megaphone to calm people down, I am not a terrorist,” the Syrian, wearing wrist shackles and held on a leash by masked security staff, told the court on Wednesday.

The Syrian’s defence lawyer said his client was “a scapegoat presented as a terrorist”.

Ahmed H., a resident of EU member Cyprus, was one of 11 people arrested by police in connection with the riot.

The other 10 were found guilty in July of illegal border crossing and were sentenced to one to three years in prison under tough new laws passed last September by eurosceptic hardliner Orban’s government.