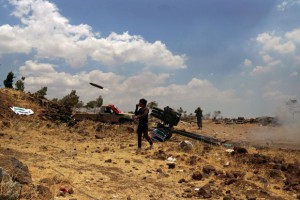 A rebel alliance in southern Syria has begun an offensive against government forces in Quneitra province, near the Israeli-occupied Golan Heights., BBC News reports.

A spokesman for the Southern Front said groups fighting in the operation had signed a pact, which did not involve the al-Qaeda-affiliated al-Nusra Front.

The area around the town of Quneitra came under heavy bombardment on Wednesday, June 17 morning, Reuters reported.

Smoke could be seen rising from the area and small arms fire was heard. Later, sirens sounded at two Israeli settlements in the Golan Heights.

Quneitra, about 70km (40 miles) south-west of the capital Damascus, has frequently seen clashes between various rebel factions and government forces since the uprising against President Bashar al-Assad began in 2011.