You are here: Home / Europe / Syrian Islamic State fighter is living in the Netherlands, security service is monitoring him 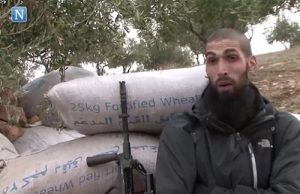 A Syrian national who has been fighting alongside IS forces in Syria has been spotted in the Netherlands and visited the Balie debating centre to watch a film about the Raqqa is Being Slaughtered Silently collective, the Volkskrant said on Friday, like reported by dutchnews.nl.

The 31-year-old man was recognised by activists from the collective during the screening, the paper said. Security service sources told the paper that the man is ‘a serious case’ who travelled to the Netherlands under a false name and is being monitored by the AIVD. They were aware of his presence before the Balie debate, the paper said.

Thousands of people who fought with IS are now being displaced since the area under the organisation’s control is crumbling. The Volkskrant said that the authorities face a dilemma about what action to take: should they continue to monitor him to learn more about his network or should they step in an arrest him?

The man cannot be deported to Syria because it is considered a war zone. Some 280 Dutch nationals are thought to have gone to fight alongside IS in Syria and Iraq and around 50 are now back in the Netherlands.

But this is the first time a foreign jihadi has been spotted, the Volkskrant said. The Balie incident took place on September 14 when the man was spotted by activists in the audience. ‘We tried to take a photo of him but he didn’t want to and ran off,’ collective member Hossam Eesa said.

Balie director Yoeri Albrecht said he and the staff were shocked by the incident. The presence of the activists had not been mentioned on the debating centre’s agenda because they are under constant threat from IS and live at secret addresses in the Netherlands and Germany, the Volkskrant said.