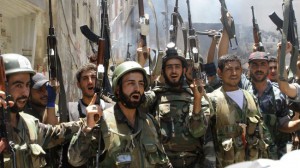 SANA said that the killed militants were from Libya, Turkey and Saudi Arabia.

Battles have been raging on in northern Latakia since rebels based in the northwestern province of Idlib captured areas adjacent to the coastal city, the hometown of President Bashar al-Assad and the heartland of the Alawite sect, an offshoot of Shiite Islam.

Rebels are stepping up their assault on Latakia due to its strategic importance to the government.

The Syrian air force has been pounding rebel positions in northern Latakia, killing dozens of them almost daily.

Also on Friday, government forces targeted the venue of a meeting of rebel commanders in the southern province of Daraa, killing seven of them and injuring a number of others, SANA said.