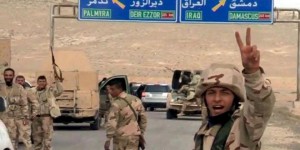 Syrian government forces, backed by Russian airstrikes, on Thursday pushed into the ancient town of Palmyra, which has been held by the Islamic State group since May, state TV reported.

The advance came after the troops managed this week to capture several hills and high ground around the town, famed for its priceless archaeological site and Roman ruins. Syrian troops have been on the offensive for days in an attempt to capture the town.

The state TV broadcast footage of its reporter, embedded with the Syrian military, speaking live from the entrance of Palmyra and saying that as of midday Thursday, the fighting was concentrated near the archaeological site on the southwestern edge of the town.

Cracks of gunfire and explosions echoed as the reporter spoke. The TV also aired footage showing soldiers walking and SUVs driving near a building that appears to have been a hotel.