You are here: Home / MidEastGulf / Syrian forces and allies clash with jihadist rebels near Damascus 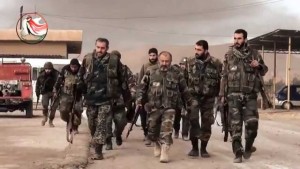 Syrian government forces and their allies clashed with rebels near Damascus on Friday, and used helicopter gunships in raids in the area in the latest violence to disrupt a nationwide ceasefire that otherwise appeared to hold, monitors said.

The clashes took place in a rebel-held valley northwest of Damascus, the Syrian Observatory for Human Rights said.

A rebel official also reported clashes in the area, where the Syrian army began an offensive last week to recapture the area which provides most of Damascus’s water supplies.