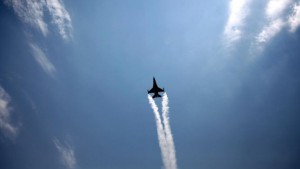 Syrian government forces used newly arrived Russian warplanes to bombard Islamic State fighters in Aleppo province in northern Syria, a monitor said on Thursday, in an attempt to break a siege on a nearby air base.

Air strikes that began during the week were accompanied by ground attacks near the Kweiris air base in the east of Aleppo province, where government troops have long been holed up, the Britain-based Syrian Observatory for Human Rights said.

A recent Russian military buildup in Syria to bolster Damascus has alarmed the United States and Western European countries.