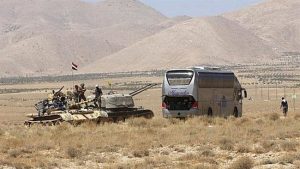 Hundreds of fighters from the Daesh group arrived on the outskirts of Syria’s last major rebel bastion of Idlib under a regime transfer from the east of the country, a monitor said according to jordantimes.com.

The militants were ferried overnight from the eastern province of Deir Ezzor near the Iraqi border, said the Syrian Observatory for Human Rights.

“Regime forces transported more than 400 Daesh fighters late Sunday from the desert near the town of Albu Kamal,” the Britain-based monitor said.

They arrived in the eastern countryside of the north-western province of Idlib at dawn on Monday, near areas where other jihadist groups are present, it said.

“Until now, we haven’t got precise information on whether or not they have entered these areas,” observatory head Rami Abdel Rahman said on Monday evening.

A deal last week between regime ally Moscow and rebel backer Ankara has temporarily averted a regime offensive on the militant and rebel-held Idlib region on the border with Turkey.

More than half of the region is controlled by Hayat Tahrir Al Sham, an alliance led by Al Qaeda’s former Syria affiliate, while most of the rest is under the control of Turkey-backed rebels.

But other militants groups are also present in Idlib, including the Al Qaeda-linked Hurras Al Deen extremist group.

Similar transfers of Daesh fighters have occurred in recent years.

In May, President Bashar Assad’s regime bussed 1,600 people — Daesh fighters and their relatives — out of a southern Damascus suburb and into the vast Badiya desert sweeping across the country to the Iraqi border.

The transfers saw the government retake control of Yarmuk, a Palestinian refugee camp turned bustling neighbourhood before the seven-year civil war, after weeks of fighting to expel the militants.

In August 2017, hundreds of Daesh fighters were evacuated from a Syrian-Lebanese border region to Deir Ezzor, according to the Lebanese Shiite movement Hizbollah, which fights alongside Assad’s troops in Syria.

Daesh swept across vast parts of Syria and neighbouring Iraq in 2014, declaring a “caliphate” in areas it controlled.

But the extremist group has since lost most of that territory to various offensives in both countries.

In Syria, Daesh clings on to a small pocket in Deir Ezzor, where it is under attack by US-backed forces. The Russia-backed regime has also fought it in the Badiya Desert.