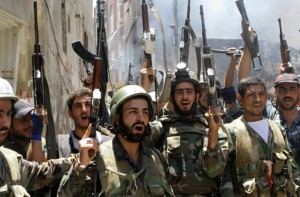 The Syrian army continued targeting extremist organizations’ hotbeds and gatherings across the country, leaving scores of their members dead and injured and their weapons and ammunition destroyed in different provinces.

Syrian army units destroyed the Daesh hideouts and fortresses in the villages and towns of Rasm al-Abboud, al-Jaberiyeh, Hmaimiyeh and Abu Danneh in the eastern countryside of Aleppo province, in addition to demolishing a number of their members with all weapons and ammunition inside  hideouts.

A military source told SANA on Sunday that the army inflicted heavy losses upon Daesh in personnel and equipment near the Air Force Academy, east of Aleppo city.

Meanwhile, a number of extremists, mostly from al-Nusra Front, were killed and injured when their vehicles were destroyed in the army operations in the village of Khalsah, south of Karasi village in the southern countryside of the province.

Daesh and Nusra Front acknowledged on their social media websites the killing of a number of their members, among them a military leader in Nusra Front, Faisal Sharif, nicknamed Abu Omair al-Ansari.

The Syrian army established control over Tal Mamo and the two villages of Birawi and Azizit Samaan in the southern countryside of Aleppo province.

A Syrian army unit killed more than eigh and injured 13 others from the al-Jabha al-Shamiyeh extremist group in Maakraba village, in the Hama countryside. The Syrian army destroyed their vehicles and different launchers, field sources told SANA reporter on Sunday.

Mohammad Radwan al-Hasawi, a known al-Jabha al-Shamiyeh leader, was among the dead.

Army units carried out special operations on the supply routes and positions in Morek, Kafr Nabouda and Tal Skeik, killing a number of  Nusra Front extremists.

An army unit destroyed a vehicle loaded with arms and ammunition and killed five extremists in the vicinity of Tal Uthman, 35km northwest of Hama city. Three more were killed in army operation against Nusra Front in the village of Qalet al-Madeeq.

Nusra Front acknowledged on their social media pages that 16 of their members were killed in the northern countryside of Hama province.

In the neighboring province of Hama, extremists faced heavy losses in personnel and equipment in army operations against their hideouts in Saraqeb city in the province, the field sources added.

Syrian army units destroyed a headquarters for the Jund al-Aqsa extremist organization in a special operation against their positions in Khan Sheikhoun, 70km south of Idleb city.

In the central province of Homs, the Syrian army air force destroys many vehicles and Daesh hideouts in Arak and the vicinity of Maheen.

The Syrian army air force destroyed extremist gathering places and strongholds in al- Mara’iayeh and al-Jafra, in the countryside of Aleppo and Deir Ezzor provinces.

A Sryrian army unit clashed with extremists in the al-Manshiyeh neighborhood in Daraa. Another army unit destroyed an extremists’ hideouts in Daraa al-Balad.

Nusra Front extremists were killed and their munition destroyed in a Syrian army unit’s special operations movement in the northern entrance of Daraa city.