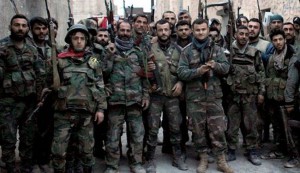 Syrian state television said on Wednesday the army and allied militia had secured the perimeter of an oil field near the central city of Palmyra which had been the focus of recent heavy fighting with Islamic State militants.

The report said the army took control of the area surrounding Jazal field, territory that contains important sites for energy production in Homs province, and killed a number of Islamic State fighters.

The advance appeared to be an attempt to shore up defense lines near Palmyra, an Islamic State-held city home to Roman ruins that are listed as a UNESCO World Heritage site.

Jazal is a medium-sized field in Syria that produced several thousand barrels of oil per day when functioning under normal conditions. The area, which lies to the north west of Palmyra, includes a complex for natural gas extraction.

Islamic State captured Palmyra in May in a major blow to the military. A source in Syria briefed on developments said on Tuesday the army’s operations in the area were aimed at shoring up defenses but were not immediate preparations for retaking the city.

Syria’s defense minister visited army units in the Homs countryside earlier this month in what appeared to be the latest in a series of morale-boosting trips by senior officials to military outposts.

On Tuesday Kurdish-led forces also seized the town of Ain Issa in northern Syria from Islamic State after capturing a military base overnight. They were aided by U.S.-led air strikes in some of the most significant gains yet against the militants who had made major advances in Syria and Iraq in May.