You are here: Home / MidEastGulf / Syrian army says it’s closing in on Islamic State in Palmyra 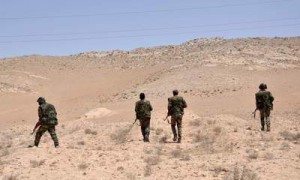 The Syrian army said it was closing in on Islamic State militants in control of Palmyra, in a major offensive to recapture the city of Roman ruins from the jihadists.

A newsflash on state television quoted a Syrian army source as saying its forces were in the vicinity of the city.

“The units of the army had delivered concentrated hits to the terrorists’ hideouts and killed many of them,” an army statement said.

In the last few days the army has intensified its aerial bombardment of the central Syrian city, also known as Tadmur, in the heaviest such raids since it was seized by the Sunni Islamist group last May.

The army said in the last 24 hours it had taken Nuzl Hayal and the Tel al Marmala on the outskirts of the city and hilltops about 10 km (six miles) from the center.

The city of 50,000 people is the site of some of the world’s most extensive and best-preserved ancient Roman ruins.

Islamic State is fighting the Kurdish YPG militia along the northern border with Turkey and with the Syrian military around Hasaka city to the east.

The United States said this week it had intensified an aerial campaign against Islamic State in Syria with a wave of strikes in and around Raqqa city, the de facto capital of the militants’ self-declared caliphate in parts of Syria and Iraq.