You are here: Home / MidEastGulf / Syrian army says it will ‘bring down’ any Turkish war planes in its airspace 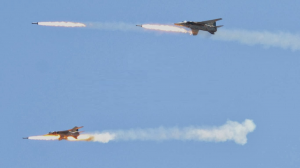 The Syrian military said that it would bring down any Turkish war planes entering Syrian air space, a response to air strikes carried out by Turkey overnight in northern Syria.

“Any attempt to once again breach Syrian airspace by Turkish war planes will be dealt with and they will be brought down by all means available,” the Syrian army general command said in a statement.

Northern Syria is an increasingly complex battlefield and the Oct. 18 air strikes highlighted the conflicting agendas of NATO members Turkey and the United States.

At the same time, the United States has backed PYD-led forces in their own fight against ISIL, infuriating Ankara, which sees the YPG as an extension of the outlawed Kurdistan Workers’ Party (PKK) militants.