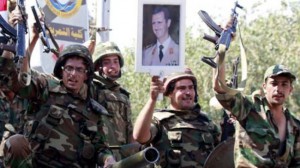 The Syrian army said on Sunday it had repulsed a major offensive by ISIS militants in the northeastern city of Hassakeh and drove out fighters who had taken over key installations on the southern edge of the city.

The northeastern corner of Syria is strategically important because it links areas controlled by ISIS in Syria and Iraq. Syrian Kurds have also sought to expand their territorial control over a region that streches from Kobani to Qamishili they see as part of a future historic Kurdish state.

The militants, approaching from their stronghold the city of Shadadi, further south of Hassakeh city, made lighting advances this week after conducting around a dozen suicide attacks using explosives-laden trucks on army checkpoints in the city.

But Syrian state television, quoting an army source, said in a newsflash they had taken back an electricity station, a juvenile prison and two villages almost two kilometers (one mile) south of the city that had been occupied by militants.

The attacks were the biggest push launched by the ultra hardline militants on Hassakeh, the provincial capital of the oil and grain producing province of Syria, that is divided into zones run separately by the government of President Bashar Assad and a Kurdish administration.

The offensive was meant to relieve pressure on hardline jihadis who have otherwise lost signficant ground recently to Kurds and some local Arab tribes backing them after their loss of Arab inhabited villages around Ras al-Ain and Tal Abyad, both major towns that lie north west of Hassakeh along the Turkish border.

The Kurds, whose well-organized militia YPG receives air support from a U.S. led alliance bombing ISIS, had been helping government forces to repel last week’s attack, according to the Syrian Observatory for Human Rights.

The Observatory, which tracks violence across the country, said at least 71 army and loyalist militias were killed in the week-long battles with ISIS.

The United States and its allies said on Thursday they staged 17 airstrikes on ISIS targets in Syria and Iraq with four of the raids near Hassakeh.