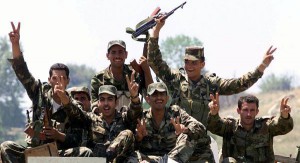 The Syrian army regained control of a road southeast of Aleppo on Wednesday, state television said, taking back the government’s only supply route into the city from Islamic State fighters who had seized it last month.

Army forces took full control of the road which runs from Aleppo through the towns of Khanaser and Ithriya and links up with the cities of Hama and Homs further south, the channel flashed in a news bulletin. The Syrian Observatory for Human Rights monitoring group confirmed the report.

The road is the army’s supply route to government-held western parts of Aleppo, home to around 2 million people.

Rebels are mainly in the eastern sector of the city, which was Syria’s most populous before the conflict broke out in 2011.

Islamic State said late last month it had taken control of most of the Syrian army checkpoints on the road and seized large caches of ammunition from army outposts in the area.

Areas around Aleppo have seen weeks of heavy fighting after Syrian troops backed by Lebanese Hezbollah and Iranian fighters launched an offensive to retake territory around Aleppo from rebels and jihadist fighters.

The offensive has concentrated so far on clearing insurgent-held areas south of Aleppo rather than the city itself.

It is one of several assaults carried out by pro-government ground forces since Russian jets began carrying out air strikes on Sept. 30 in support of President Bashar al-Assad.

Syrian troops are also trying to advance to the east of Aleppo towards Kweires military airport, aiming to break a siege of the base by Islamic State and other insurgents.