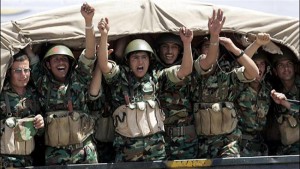 “With our Russian partners we are preparing an operation to free Aleppo and block all illegal armed groups that have not joined or have broken the ceasefire deal,” Interfax news agency quoted Halqi as saying following a meeting with Russian lawmakers in Damascus.

He said that regaining control of Aleppo from rebels hostile to the regime of President Bashar al-Assad would allow government forces to advance east to Deir Ezzor, some 60 percent of which is under the control of the Islamic State group.

Damascus has vowed with the support of its Russian allies to drive IS out of the area after its recent victory over the group two weeks ago in the ancient city of Palmyra.

Aleppo, formerly Syria’s economic capital and the country’s second city, has since 2012 been divided into zones held between rebel groups and areas still under government control.

A February 27 truce brokered by the United States and Russia, which back opposing sides in Syria’s war, does not apply to the fight against jihadist groups, which Damascus is now concentrating on dislodging.

Around Aleppo “the ceasefire has all but collapsed along the main front lines” of the conflict, Rami Abdel Rahman, director of the Syrian Observatory for Human Rights, said Sunday.

The Observatory said earlier that 24 hours of clashes around Aleppo had left at least 16 pro-regime fighters and 19 members of Al-Qaeda’s affiliate and allied rebel groups dead.

More than 270,000 people have been killed since Syria’s conflict first broke out in March 2011.