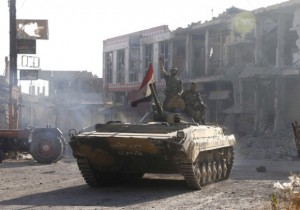 The operation, which started by targeting the Farafra District, was deemed the biggest regime-led assault aimed at wiping out rebel groups and retaking Aleppo city.

“After liberating the area, our special teams started to dismantle explosives in the district,” the official said.

The Farafra District, located near the Aleppo historical citadel, was one of the main strongholds for the rebel fighters in the city.

“Heavy clashes took place between the regime’s forces and the rebels, before the latter were obliged to withdraw from major parts of the district,” media activist Ahmed al-Halabi told ARA News in Aleppo.

The source added that sporadic clashes continued in the vicinity of Farafra until Tuesday midnight, as the army brought in more military reinforcements in a bid expel the rebel fighters from the city centre.

The pro-Assad forces, including the Lebanese Shia militia of Hezbollah, also attacked rebel-held areas near the Bab Antakya district, killing and wounding dozens of rebel fighters.

Speaking to ARA News, rebel spokesman Saleh al-Zein said that the Assad regime took advantage of the current internationally-sponsored truce to launch a main offensive on rebel positions in Aleppo.

“This offensive was another proof that the regime could never commit to any truce deal. Pro-Assad forces took advantage of the ongoing ceasefire to hit the rebels,” al-Zein said.

According to activists, at least 200 civilians have been killed under Syrian and Russian airstrikes in the past week in Aleppo. The UN envoy Staffan de Mistura called the recent aerial campaign one of the worst of the 5 1/2-year war.