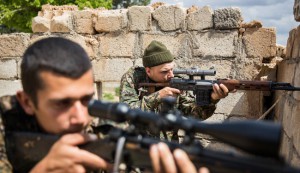 Syrian troops and Kurdish fighters ousted the Islamic State group from the northeastern city of Hassakeh Tuesday after more than a month of fighting, activists said.

ISIS “was expelled by the army from Zuhur, the last district in which it was present in Hassakeh, and its fighters have been pushed to the southern outskirts of the city,” said Syrian Observatory for Human Rights director Rami Adel Rahman.

Control of Hassakeh is divided between Kurdish fighters and government troops, and both have battled to push ISIS out of the city since the jihadis entered last month.