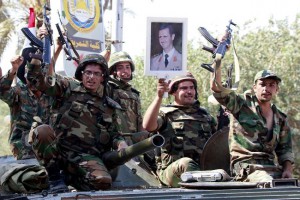 Syrian army bombing in the mountainous area along the border with Lebanon killed dozens of insurgents, Hezbollah’s Manar television said.

The rebels have been attacking the Syrian army from the Qalamoun mountains and are battling fighters from Shi’ite Muslim Hezbollah, a staunch ally of Syrian President Bashar al Assad, which has sent hundreds to fight alongside his forces