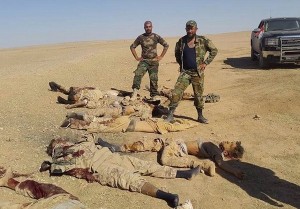 The Syrian army forces killed 18 militants with the Islamic State (IS) group in an operation Monday in the countryside of the eastern province of Deir al-Zour, which has been subject to intense attacks by the terror group for three days, according to xinhuanet.com .

State news agency SANA said a Saudi fighter was among those killed in the ambush that targeted one of the IS positions in the city of Mayadeen in the countryside of Deir al-Zour.

It added that the military forces also destroyed weaponry the IS were using as well as vehicles.

Meanwhile, pro-government al-Watan Online newspaper said the Syrian army on Monday foiled another wave of IS offensive for the third straight day.

The Syrian Observatory for Human Rights, an opposition monitor group, said intense battles were raging on Monday between the IS militants and the Syrian forces in Deir al-Zour.

It added that the terror group succeeded to advance in the vicinity of the Deir al-Zour airbase, the only port the government uses in and outside the city, as the IS group has besieged the government-controlled parts of Deir al-Zour since early 2015.

The London-based watchdog group said the Syrian warplanes are heavily engaged in bombing the IS positions to prevent the progress of the group, which apparently aimed at stripping the government of its control over that oil-rich city, where 700,000 civilians are besieged by the terror group.

It added that the IS offensive is the most violent since the terror group attacked areas in Deir al-Zour and besieged government-controlled areas in the city two years ago.

The IS militants have been preparing for this new offensive since early this month, when they brought in tires and crude oil, in what the Observatory said was a preparation to make huge fire during their offensive.

It’s worth mentioning that the IS controls large swathes of the Deir al-Zour countryside, and its recent attempt is to storm the besieged government-controlled areas in the city.

Deir al-Zour holds a significance for the IS as an oil-rich area near the Iraqi borders.