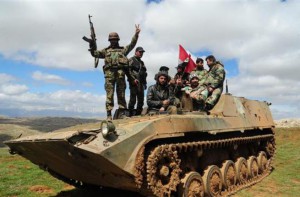 The Syrian army and Hezbollah took large swaths of the Darb al-Sham plain this weekend, near the besieged border town of Zabadani, according to a Lebanese security source. They killed 25 militants in ambushes and lost three Syrian soldiers over the weekend and one Hezbollah fighter Friday.

Al-Manar TV reported that the side of the regime had sealed off one of the main passageways of the town, further tightening their siege on rebel fighters encamped there for the past two years. Video broadcast showed Syrian army forces firing mortars and rockets from a hilltop overlooking the town and charging into populated areas with tanks.

Dwindling food and medical supplies are forcing Zabadani residents to flee, but activists say there are still a few thousand civilians there, mostly in the eastern district.

Syrian government forces backed by fighters from Hezbollah have been on the offensive in the Zabadani area for the past two weeks.

The Britain-based Syrian Observatory for Human Rights said regime helicopters have dropped 28 barrel bombs on the town and its surrounding areas. Rebels are sending reinforcements to the Jamaat area west of Zabadani, according to the Saudi newspaper Al-Watan.

Hezbollah says the conquest of Zabadani, 47 kilometers northwest of Damascus, is important to Lebanon’s security. Lying on the Damascus-Beirut road, the town is linked to Hezbollah’s strategic movements. Capturing the largest Qalamoun city would add to Hezbollah’s recent victories in Lebanon’s eastern mountain range since launching a wider offensive to oust militants from the border region in early May.

Hezbollah may be concealing some of its losses, Al-Watan alleged Sunday. It quoted a source saying that the party is burying its fighters in Zabadani and only returning officers for martyrdom commemorations in southern Beirut.