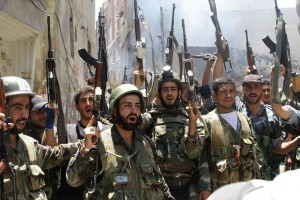 Syrian army assaults south of Aleppo are being supported by hundreds of fighters from Iran and Lebanon’s Hezbollah, in the start of a long-awaited and major offensive around the northern city, a senior military source in Syria said on Friday.

“This is the promised battle,” the source said, adding that the bulk of the ground force was made up of Syrian troops, who have been supported by Russian air strikes. “The main core is the Syrian army,” he said.