You are here: Home / MidEastGulf / Syrian army drives rebels from air base in south 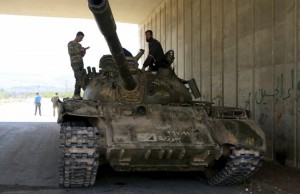 The Syrian army and allied fighters have driven insurgents from parts of an air base they had seized in the southern province of Sweida, an activist group monitoring the conflict reported Friday.

The Syrian Observatory for Human Rights, a UK-based activist group that tracks the war, said the insurgents had evacuated parts of al-Thala air base taken in an advance Wednesday. “There is a rebel retreat,” said Rami Abdulrahman, who runs the Observatory.

Heavy Syrian army air strikes and reinforcements drafted in from nearby Sweida city had helped repel the rebel advance, he said.