You are here: Home / Mediterranean / Syrian Army advances in Qalamoun near Lebanon border 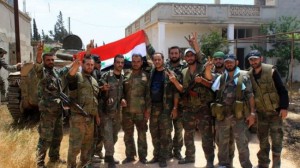 Syrian Army troops continue to gain ground in their fight against foreign-backed armed groups, and have managed to gain control in a number of areas along the border with Lebanon, Press TV reports.

On Tuesday, Syrian government forces continued to engage militants in the strategic and mountainous Qalamoun region near the capital, Damascus, and thwarted attempts by groups of armed men to infiltrate the country from neighboring Lebanon.

Syrian soldiers, backed by fighters from Lebanese Hezbollah resistance movement, pushed ahead with their massive offensive against foreign-backed militants in the area.

The development comes as Syrian troopers recently launched a surprise attack against militants in the village of al-Jarajir, located 73 kilometers (46 miles) northeast of the capital, Damascus, and killed scores of them in the process.

“After we took control of al-Qalamoun, the Army was deployed on the border with Lebanon, especially close to (the Lebanese border town of) al-Tufail. Terrorists always try to retake towns we secured, but they fail,” a Syrian army commander, who did not want to be named, told Press TV.

Syrian military officials say foreign-sponsored militants still occupy pockets of land near the southwestern city of al-Zabadani, which lies 30 kilometers (19 miles) northwest of Damascus, but units of government soldiers fully monitor any movement of the extremists.

“We were able to cut the supply lines and connections between terrorists on the edges of al-Qalamoun region, and others in the last stretch of the series of these mountains near al-Zabadani. Army operations thus prevented terrorists from sending car bombs from the Lebanese side,” the commander said.

Syria has been grappling with a deadly crisis since March 2011. The violence has so far claimed the lives of over 222,000 people, according to the Syrian Observatory for Human Rights.