You are here: Home / MidEastGulf / Syrian and Russian troops seize strategic area on border with Jordan 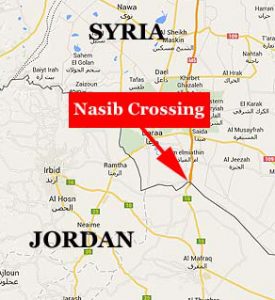 Syrian government troops and Russian forces supporting them took control of Nasib’s border crossing on the Jordan-Syrian border. This is reported by Reuters referring to the media, run by the Iranian branch of the Hezbollah group.

According to the agency, Syrian and Russian troops seized the trade highway from Damascus to Amman, Jordan. Earlier, the road was controlled by the insurgents for three years.

Representatives of the United Nations confirmed that the Syrian refugees who found themselves on the border were able to move to other territories.

We remind you that earlier the rebels announced the return to negotiations with the Russian Federation after on the night of July 5, Russian and Syrian aviation inflicted more than 600 air strikes on the province of Deraa within 15 hours. The rebels promised to lay down their arms, demanding in return a settlement of their status in a future peace treaty. Russia in response demanded complete and unconditional surrender.

The message confirms that the operation is aimed against the terrorist grouping ISIL on the territory of Syria.

At the beginning of April 2018, it was reported that the U.S. aircraft carrier group, led by “Harry Truman”, was to be deployed in East Mediterranean.

The series of official statements informed that the group will be deployed in Europe and the Middle East. A guided-missile cruiser USS Normandy and four destroyers are included in the membership.

It should be noted that earlier mass media reported that Pentagon considered a possibility to use a Carrier Strike Group in East Mediterranean to counterwork “escalating challenges from Russia and China” in this region.

Earlier, a chemical attack happened in Douma in East Ghouta on April 7, when 70 people died as a result. The West blames Bashar al-Assad and Russia for the attack. The U.S. President Donald Trump on April 13 ordered missile attacks at the territory of Syria as a reaction to chemical weapon use in Douma. Britain and France joint them.