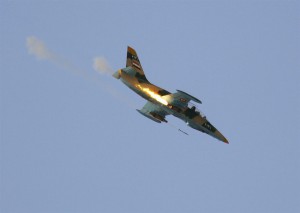 At least 38 Islamic State group fighters have been killed in air strikes by the Syrian Air Force against three jihadist-held towns in central Syria.

The Syrian air force has been increasing its strikes against IS in recent days as it received reinforcements from Russia, he said.

“The number of raids is growing and the strikes are more precise after the Syrian air force received arms and more efficient planes from Moscow,” said Abdel Rahman, whose group relies on broad network of civilian, military and medical sources inside Syria.

Experts close to the regime have told AFP that Russia has sent advisers to train Syrian troops in the new weapons, in particular short-range air defence systems and tanks.

US military officials told AFP that Russia had deployed 28 combat planes in Syria, in the latest move in Moscow’s increasing military presence in the war-torn country.