You are here: Home / MidEastGulf / Syria without Assad would be like Libya – Syrian Catholic Archbishop 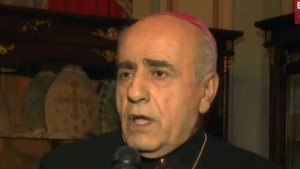 If Syrian president Bashar al-Assad were removed from power now, Syria would become like Libya, a Syrian bishop has warned.

Archbishop Jacques Behnan Hindo, Syrian Catholic Archbishop of Hasakeh-Nisibi, said “the Syrians will decide if and when Assad has to go away, and not the Daesh [the so-called Islamic State] or the West,” continuing “and it is certain that if Assad goes away now, Syria will become like Libya”.

He also warned that the ISIS-besieged city of Deir al Zor has run out of food so that its population is “literally starving”.

The archbishops’ comments came in the aftermath of American criticism of Russian attacks on anti-Assad rebels linked with al-Qaeda. “US Senator John McCain protested saying that the Russians are not bombing the positions of the Islamic State, but rather the anti-Assad rebels trained by the CIA,” the archbishop said, continuing, “I find these words are disturbing. They represent a blatant admission that behind the war against Assad there is also the CIA.”

Russian president Vladimir Putin, who has long backed President Assad, claims western intervention in the Middle East has caused the current Middle East crisis. Speaking in the UN last month he said “an aggressive foreign interference has resulted in a brazen destruction of national institutions and the lifestyle itself”, criticising how “policies based on self-conceit and belief in one’s exceptionality and impunity have never been abandoned”.

Calling for a coalition to fight Islamist terrorism, he said that “any attempts to play games with terrorists, let alone to arm them, are not just short-sighted but fire-hazardous”.

The Russian president’s UN address was followed by air attacks on a succession of targets identified by the Syrian government, which is believed to be responsible for the majority of deaths in the country since the civil war began in early 2011. Among those attacked were Islamist rebels including Al-Qaeda’s Syrian branch, the so-called ‘Army of Conquest’.

“Western propaganda keeps talking about moderate rebels, who do not exist,” said Archbishop Hindo, continuing, “there is something very disturbing about all this: there is a superpower that since September 11 protests because the Russians hit the militias of al-Qaeda in Syria. What does it mean? Al-Qaeda is now a US ally, just because in Syria it has a different name? But do they really despise our intelligence and our memory?”

Russian planes have since been reported to have attacked ISIS targets at the city of Palmyra, where a 2000-year-old triumphal arch was destroyed on Monday.