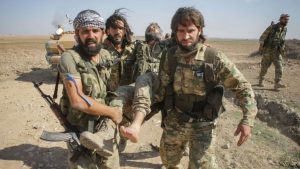 Russia’s president Vladimir Putin and his Turkish counterpart Recep Tayyip Erdogan are set to meet today in Moscow in a bid to ease tensions over the escalation in violence in Syria, where they support opposing sides. Erdogan is expected to persuade Putin to agree to a quick ceasefire in Syria’s last rebel stronghold, the Idlib province, like reported by neweurope.eu.

Last week, 34 Turkish soldiers were killed and dozens more wounded in an airstrike by Russian-backed Syrian forces in Idlib. Turkey in response killed 19 Syrian soldiers in drone strikes and shot down three Syrian warplanes. Syria’s president Bashar al-Assad’s forces took over the strategic city of Saraqeb, which lies at the junction of the M4 and M5 highways.

Turkey later said it was pursuing a military operation called “Operation Spring Shield”, which is its fourth and biggest intervention yet into Syria’s nine-year civil war. The Turkish government has also opened the borders, allowing thousands of migrants to head for Europe, a move seen as Erdogan’s attempt to force the EU and NATO to support his military operation in Idlib. The US has expressed strong support for Turkey following last month’s attack on Turkish soldiers, saying that “we stand by our NATO ally Turkey” and demanding that Syria and Russia end their “despicable” offensive in Idlib. Turkey has the second largest army in the NATO alliance.

Turkey wants Assad’s forces to pull back behind lines agreed under the 2018 Sochi memorandum with Moscow. The deal allows Turkey to deploy troops at military observation posts around Idlib. In return, Turkey was obliged to separate jihadists from other opposition factions in the region and disarm them. However, the Syrian regime views the outposts with hostility, and has previously surrounded some of them. Russia earlier said that Turkey had failed to fulfil its obligations under the deal.

Analysts say that with the current situation, Erdogan’s desire to convince Putin to live up to the 2018 deal will not be easy, as the Syrian government forces have made major gains since December. Last month, they seized in one day an area that they could not take for eight years, including the strategic M5 highway and the northern city of Aleppo, which was Syria’s commercial center before the war. The M5 was once a major commercial route linking Alepo with Syria’s capital, Damascus.

Hours before the talks, an airstrike on Maaret Musreen, a rebel-held village in northwestern Syria, hit a farm where internally displaced families were taking shelter, killing at least 18 people and wounding dozens, including children, opposition activists said. They blamed Russian warplanes for the strike.

On 3 March, a United Nations commission published a report that finds that the actions by the armed forces of both Russia and Turkey in Syria could amount to war crimes. It also found that Russia directed its attacks on civilian sites, including hospitals and schools. The Kremlin has immediately rejected the report.

The day before the talks, a fistfight erupted in the Turkish parliament during a speech by Engin Ozkoc, a legislator from the opposition Republican People’s Party. He had earlier accused Erdogan of disrespecting Turkish soldiers who died in Syria, and called him “dishonourable, ignoble, low and treacherous”. Dozens of lawmakers joined the brawl, some climbing on top of desks to throw punches, while others tried to stop the fighting.

This morning, Erdogan arrived in Moscow, accompanied by foreign minister Mevlut Cavusoglu and defense minister Hulusi Akar, among others. He was welcomed at the airport by Russia’s deputy foreign minister, Sergei Ryabkov, Russian Ambassador to Turkey Akeksey Yerhov and Turkish envoy Mehmet Samsar along with other high profile representatives.

Erdogan has signaled he would seek a ceasefire, despite his recent threats that the latest Turkish attacks against Syrian government forces were “only the beginning” of revenge for the deaths of the several dozen Turkish soldiers in last week’s Syrian bombing attacks.

The war in Syria started with a popular movement against Assad’s rule that was brutally repressed. Russia entered the civil war in 2015, aiding Assad in what it insisted was an anti-terrorist campaign against Islamic State, and what Western powers have seen as an attempt to root out opposition to Assad’s rule.

More than 380,000 people were killed in nine years and about half of the country’s population is displaced. The United Nations said that the current escalation may be the worst humanitarian crisis in the nine-year war.