You are here: Home / MidEastGulf / Syria: US troops in clash with pro-Assad government militia 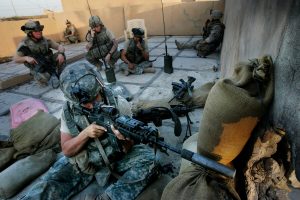 US troops exchanged fire with pro-Assad gunmen with the Syrian regime claiming a civilian had been killed by American fire.

An US military patrol was stopped in the country’s north-west by a crowd of militiamen and civilians loyal to Bashar al-Assad.

The fracas began with angry words and one Syrian man tearing a US flag off one of the armoured vehicles.

The US said its troops are only in Syria to fight Isil.

“The American occupation soldiers fired live bullets and smoke bombs on the locals as a civilian was martyred,” the Assad regime claimed.