You are here: Home / MidEastGulf / Syria: US sends more troops to Manbij 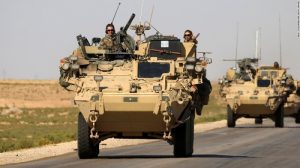 US has deployed more forces to Manbij, in northeastern Syria near the Turkish border, and more troops will be deployed there soon, said a senior official according to basnews.com.

“We have set up several new bases for the US forces in Manbij, ready to react to any offensive that Turkey may start on the region,” Shiyar Gardi, a senior member of the Manbij Military Council, told Kurdistan 24.

“Most of the newly deployed troops are from the US, in addition to other nationalities, including French and British,” Khalil Mustafa, an MMC officer, told Kurdistan 24, noting that they all operate in accordance with the US-led International Coalition Against the Islamic State (IS).

Manbij was freed from the extremist group of IS in 2016 by the Syrian Democratic Forces (SDF) and the International Coalition.

Turkey started attacking the region since it has taken over the Kurdish enclave of Afrin in Syria, urging the US to pull out its forces from the area.

In last January, Turkey and Syrian rebels began an operation on Afrin. They entered the city through a military incursion on March 18.