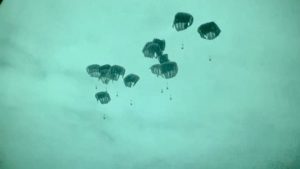 “This support comes within the framework of the joint work and coordination between the two sides in order to eliminate the terrorist cells and organizations and the efforts of both sides to maintain security and stability in Northeastern Syria,” read an SDF press release.

He added, “This demonstrates the flexibility and advanced capabilities that we bring to the fight against ISIS.”

The US-led global coalition also delivered heavy artillery to military bases in Deir al-Zor, airlifted by a CH-47 Chinook helicopter. The artillery has been at these compounds previously when it was used in the fight against the so-called Islamic State.

“US-led International Coalition sent today, Sunday, reinforcements to its military bases in [Deir al-Zor] in the framework of fighting ISIS and continuing partnership with SDF,” the SDF media center explained. “It is worth mentioning that these reinforcements are the continuation of the support delivered by airdrops some days ago.”

Despite the group’s territorial collapse in March 2019 to the Kurdish-led SDF and coalition forces, the anti-Islamic State alliance continues military efforts to locate and root out sleeper cells of the extremist group.

However, after a Turkish military incursion in early October into areas in northern Syria under SDF control, the SDF forces “temporarily paused” operations against the Islamic State to enable its fighters to confront Ankara’s cross-border campaign.

Turkey’s operation came after US President Donald Trump’s decision to withdraw US troops from Syria. The White House then agreed in late October to leave between 500 to 600 American forces in Syria to protect oilfields in the Hasakah and Deir al-Zor provinces.

As the rate of Turkish attacks decreased and amid a ceasefire deal with both Russian and US backing, the SDF has continued counter-Islamic State operations with Coalition forces.

Despite this, Islamic State sleeper cell activity has continued, with the majority of these attacks taking place in Deir al-Zor.

According to a recent report of the Syria-based Rojava Information Centre (RIC) in January 2020, Deir al-Zor had been the site of 40 attacks, while one took place in Manbij, four in Raqqa, and five in Hasakah.

Farhan al-Askar (Abu Wael), a Raqqa Military Council commander, told Kurdistan 24 that there are “sleeper cells and also agents of ISIS who are constantly causing troubles for the civilians in [Deir al-Zor].”

“There are more issues in [Deir al-Zor] because of the resources that the region has, the oil for instance, all the attempts [by Islamic State fighters] is so that they can enable themselves to recontrol those resources.”