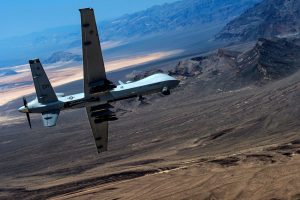 “U.S. forces conducted a strike against Al Qaeda in Syria in the vicinity of Idlib, Syria, Oct. 15. AQ-S continues to present a threat to America and our allies,” Maj. Beth Riordan, a spokesman for U.S. Central Command said in a statement to Fox News.

Officials say the strike was carried out by the U.S. military’s elite Joint Special Operations Command.

It’s the first drone strike by the U.S. military against Al Qaeda in Syria since mid-September.

The U.S. military has been using a new missile to kill terrorists in the past year dubbed the “flying Ginsu” for the knives released by the specially modified Hellfire missile carried on MQ-9 Reaper drones. The missile does not carry a high explosive warhead greatly reducing collateral damage and killing innocent civilians. The GPS-guided “Ginsu” missile falls from the sky with enough force to shred through car roofs and human flesh while terrorists are traveling by car. Anyone nearby has a greater chance to live due to the lack of explosive in the missile.

It’s not clear if this type of missile was used Thursday, officials say.

Idlib is the same area in Syria where nearly a year ago President Trump approved a raid by U.S. Special Operations forces to kill ISIS leader Abu Bakr al-Baghdadi.

The names of the Al Qaeda leaders killed were not immediately known.

Idlib is home to some of the last remaining opposition fighters who have been battling Syrian President Bashar al-Assad’s forces for nearly a decade. Over 400,000 civilians have been killed since the civil war began in 2011.