You are here: Home / MidEastGulf / Syria: US considers military strikes against Damascus 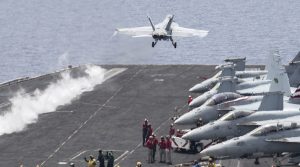 Washington is debating whether to strike militarily against Damascus following multiple reports it has used chemical weapons against civilians, according to U.S. officials, like reported by albawaba.com.

U.S. President Donald Trump launched airstrikes in Syria last April against the Shayrat air base after Damascus killed more than 80 people in the opposition-held town of Khan Sheikhun using sarin or a sarin-like substance, according to a subsequent U.N. report.

The Trump administration has drawn a “red line” over the use of sarin gas. Damascus is reported to have intensified defensive measures including the deployment of Russian army units in key locations in anticipation of a U.S. attack.

But U.S. officials have referred to the “lack of evidence” that Damascus has used sarin since the Khan Sheikhun attack “therefore, striking Syria for using chlorine will lead to lowering the red line and will force Washington to respond on several occasions.”

“In addition to that, it will lead to a strategic change in the military balance and Damascus may use this to justify carrying out more operations against the opposition,” the official said.

Damascus and Moscow have repeatedly denied the use of chemical weapons and accused the opposition of doing so.

There have been several reports of chemical weapons including chlorine and sarin being used by Damascus this year, including in the besieged enclave of eastern Ghouta. Nikki Haley, U.S. ambassador to the U.N., told the Security Council on March 12 that if the 15-member body failed to act on Syria, then Washington “remains prepared to act if we must.”