You are here: Home / MidEastGulf / Syria: U.S. troops are telling militants to back away from Manbij 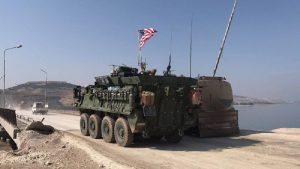 Turkey and its militia allies spent months battling the Islamic State in the northwest Syrian city of Al Bab. And soon after defeating the terrorist army in the city, Turkey reiterated its vow to shift targets and attack the Syrian-Kurdish People’s Protection Units, or YPG, in the city of Manbij to the east, like reported by warisboring.com.

It’s certainly a predicament. The YPG is a central component of the Syrian Democratic Forces, a U.S.-backed army that Washington relies on for its current offensive toward Raqqa, the Islamic State’s stronghold in Syria.

Previous clashes between the Turkish-FSA forces and the SDF were met with statements from Washington which invariably urged both sides to desist and focus their efforts on the Islamic State.

The Turkish-backed FSA militia fighters — a proxy army for all intents and purposes — began clashing with the SDF in Manbij on March 1. So, to prevent these clashes from escalating into a full-blown confrontation, the United States deployed additional troops to Manbij to beef up its on-the-ground presence there.

It’s also a clear warning to the Turkish-FSA force to stay away.

This is part of longstanding U.S. policy aimed at preventing fighting between Turkish-backed militants and the SDF. What makes it significant now is that U.S. ground forces have been deployed to this flashpoint to directly prevent tensions from escalating.

It goes without saying that Turkish threats to seize Manbij and deny the YPG a foothold there is massively problematic for the United States, which has also supported Turkey against the Islamic State in the northwest Syrian border regions, and — after a halt in air strikes for a few weeks — in Al Bab.

Seeing these two sides go to war with each other wouldn’t be in U.S. interests, for obvious reasons.

The U.S. military presence could also give Washington more leverage over the SDF, and prove to Ankara that only Arab fighters — not Kurdish ones with the YPG — remain in Manbij. This would uphold part of a formerly secret agreement between the two countries when the SDF/YPG offensive against the Islamic State in the city began in late May 2016.

Dorrian clearly implied this is the case in a follow-up tweet in which he confirmed that it is a U.S. objective in Manbij to “ensure there’s no persistent YPG presence.”

This development comes shortly after Russia brokered a deal between the Syrian regime and the SDF in Manbij. The agreement saw the SDF hand over villages west of the city to the Syrian army, placing regime soldiers in a buffer zone directly between the SDF and the Turkish-FSA forces.

In the latter stages of the Turkish-FSA assault on Al Bab, Syrian troops advanced toward the city from the south, prompting fears that the two sides would clash. Fighting between them risked undermining the ceasefire brokered by Russia and Turkey in December 2016.

A brief clash did occur in a village to Al Bab’s southwest. One FSA militia commander told France 24 the fighting began when “rebels shot to warn them not to get any closer, but the tank responded and a clash erupted.” Russia didn’t have any of it and quickly “intervened to calm down the situation.”

“This whole incident felt like a test,” the FSA official remarked.

Russia has provided provided air support to Turkey and the Syrian regime.

Russia and the United States seem content with curbing these disputes for now. But after the Islamic State is defeated — and chances are it will be, eventually — it’s less clear how these outside powers will keep the peace between Syria’s myriad armed factions without continuing to pump more military resources into a combustible situation.