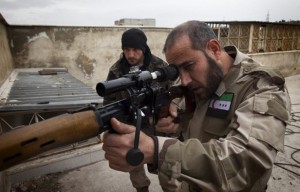 Syrian Turkmen military and political officials, who are close to Turkey, have been moving to form a unified army in northern Syria capable of confronting the Kurdish People’s Protection Units (YPG), which Ankara views as a terror group.

“Turkmen fighting groups in Syria have taken the decision to offer greater support to each other and work to create a Turkmen army if conditions permit,” Syrian Turkmen Assembly chief Abdel Rahman Mustafa told Turkish Anadolu news on Monday.

The Turkmen official’s comments came as the Syrian Turkmen Assembly held a meeting in southern Turkey’s Gaziantep that brought together Turkmen representatives from Aleppo, Tal Abyad, Jarabulus, Latakia, Idlib, Raqqa and the Golan.

Alaraby Aljadeed reported that the Turkmen military and civilian officials in the meeting decided to form a military council that reports to the Syrian Turkmen Assembly, a pro-opposition group with ties to the Turkish government.

The decision to form the council comes after calls emerged from Turkmen military formations to fight both ISIS and the Kurdish Democratic Union Party that controls the YPG, the London-based daily added.

Syrian Turkmen have already armed themselves in a series of brigades throughout Syria that are loosely affiliated with each other and count on about 10,000 armed men in total, with the largest fighting units operating in the Aleppo province.

Turkey’s security institutions maintain close links with the Turkmen units in Syria, providing special forces training to the brigades, which are affiliated with the Free Syrian Army and have taken part in operations in Aleppo, Idlib and outside Latakia.

The Turkmen National Assembly chief stressed the formation of a Turkmen army would confront what he describes as the “danger of the YPG and the acts of sectarian cleansing it is carrying out, beginning with the expulsion of 200 Turkmen settlements in [the] Tel Abyad [area].”

Both Turkish and Turkmen officials have accused YPG forces of ethnically forcibly dislocating Turkmen in northern Syria amid the Kurdish troops’ advances against ISIS.

Meanwhile, a top figure in the Iraqi Turkmen Front told Turkish Hurriyet newspaper on June 19 that the PYD was forcing Turkmen out of their homes as “a part of a project to found a Kurdish state in the region.”

The YPG flatly denied ethnic cleansing accusations, with its official spokesperson Redur Xelil assuring Tal Abyad residents “you are our people and you will return to your towns, villages and properties.”

However, the Turkmen National Assembly leader warned that the YPG is “is threatening to head west towards Jarablus and Aazaz where there is also [a] Turkmen [population].

“For a thousand years, we have ruled our areas, but now, certain nationalistic military formations are trying to take our lands by force,” Mustafa claimed.

“If we do not move we will find ourselves [unable] to return to our houses and our territory. We will stay [that way]: without a homeland.”

His comments come amid growing reports in the Turkish press that the country was preparing a ground incursion to create  a buffer zone stretching from north of Aleppo to west of Kobane in territory currently held by ISIS in a bid to stop Kurdish forces from stretching further westward in northern Syria.

Kurdish People’s Protection Units (YPG) forces backed by international coalition airstrikes have made stunning advances against ISIS, rolling back the extremist group in northeastern Syria and linking two of their de-facto autonomous cantons in mid-June after the seizure of Tel Abyad.

Turkish President Recep Tayyip Erdogan on June 26 warned that his country “will never allow” the establishment of a Kurdish state along its border, setting the stage for the reports that Turkey’s ground incursion would aim to preempt any further Kurdish advances against ISIS along the border.