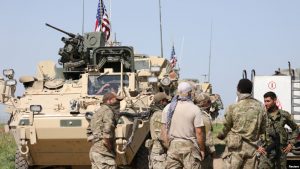 Turkey is threatening to eradicate the People’s Protection Units (YPG) militia in Syria. But such a move would put it on a collision course with the United States, which backs the Syrian Kurdish group as a key ally in the war against Islamic State and curtailing Iran’s influence, like reported by voanews.com.

Ankara claims the militia is linked to the Kurdistan Workers’ Party, (PKK), which is waging a decades-long insurgency for Kurdish autonomy in Turkey.

In an address to parliament last week, Erdogan vowed the destruction of the YPG, and slammed Washington for its armed support of the group.

“The United States has sent nearly 19,000 trucks [loaded with arms] to the YPG and PYD [Democratic Union Party] in northern Syria,” Erdogan said. “Who will they use these arms against? We demanded to buy weapons from you, and you rejected [that]. However, you are giving those arms to terrorist groups.”

The YPG, with U.S. military backing, seized control of a broad swath of Syrian territory that runs east of Syria’s Euphrates River to the Iraqi frontier. The region borders Turkey, and Ankara claims YPG control of this territory is an intolerable security threat.

Turkey’s forces have been steadily building up a presence close to strategic YPG towns. Its hardening rhetoric coincides with the U.S. indicating it will remain in Syria after IS is defeated.

Former senior Turkish diplomat Aydin Selcen, who served in Washington and in the region, said he believes the YPG has become key to U.S. objectives in the area.

“Now, the U.S.’ main struggle in the region is with Iran,” Selcen said. “And this particular triangle region to the east of the Euphrates is of high importance when it comes to stopping Iranian presence in the Middle East. I don’t see how the U.S. can do anything about the YPG presence east of the Euphrates near the Turkish border.”

He added that pushing the militia away from the Turkish border also is not viable.

“All the towns [under YPG control] are aligned along the Turkish border,” he said “So you cannot ask the YPG to leave those towns, as they will have to go to the desert areas, which is not feasible.”

Iran and Russia have been quick to exploit the apparent standoff between Turkey and the U.S.

Last month, Russian Foreign Minister Sergei Lavrov said, “The main danger to Syria’s territorial integrity originates from the eastern bank of the Euphrates, where independent and autonomous structures are created under the direct control of the United States.”

Analysts say Iran and Russia share Turkey’s concern over U.S. backing of the YPG. And they suggest a decision by the group’s political wing, the PYD, earlier this month to end talks with Damascus likely was influenced by Washington’s renewed commitment to remain in Syria.

While backing rival sides in the Syrian civil war, Turkey has found common ground with Iran and Russia to resolve the conflict. At the same time, Moscow and Tehran are widely seen to be using that cooperation to try and draw Ankara away from Washington.

Turkey already controls a large swath of Syrian territory from previous military operations against the YPG. But analysts suggest the Syrian government, Iran and Russia would likely hesitate to support the Turkish army further extending its control of Syria, even if it meant ousting U.S. forces.

Despite Turkey’s heightened rhetoric and military presence on the Syria border, there is a suspicion it remains just saber rattling.

“There was an increase in forces from the Turkish side near Tel Abyad [a YPG-controlled Syrian town] and what Mr. Erdogan said any military operation could be imminent in the east of the Euphrates,” Selcen said. “To me, this was not very probable because it would bring two NATO members — Turkey and the U.S. — face to face in Syria.”

The threat of military action could be just leverage on the U.S., sharply criticized by Turkey for its slow response to enforcing an agreed road map for the YPG to withdraw from the strategic Syrian city of Manbij.

“Manbij remains an open wound in Turkish-U.S. relations,” said international relations expert Soli Ozel of Istanbul’s Kadir Has University. “The previous U.S. administration promised Ankara YPG forces would leave the city after its capture from Islamic State, a commitment it failed to honor.”

In a move that could dial down tensions, Turkey’s Defense Minister Hulusi Akar announced this week that joint patrols by Turkish and U.S. forces would start in Manbij. Erdogan had accused Washington of foot-dragging in honoring a commitment to begin the patrols,seen by Turkey as an essential step toward removing the YPG from Manbij.

Despite Turkey’s fiery rhetoric, analysts say cooperation with the U.S. is continuing in Syria, and as a senior Western diplomat pointed out, Turkey continues to accommodate U.S. forces’ heavy reliance on its critical Incirlik airbase for Syrian operations.