You are here: Home / Analysis / Syria: the rock, the paper and the scissors

Russia is the “rock,” Iran is the “paper,” and the United States is the “scissors”… 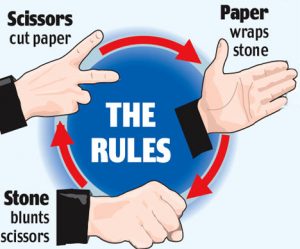 Iran’s strategy is to envelope Syria like a piece of paper, topologically combining Iran’s Iraqi “paper,” along with Iran’s Hezbollah/Lebanon “paper” to form a patchwork-quilt Shiite Empire spanning from Iran/Persia through Iraq, and Syria, and Lebanon into the Mediterranean Sea.

As an example of this, Iran just announced it was to build a trans-Iran/Iraq/Syria/Lebanon railroad.

Russia is the “rock” trying to bash the Sunni opposition to pieces in order to carve-out its eastern Mediterranean naval outpost and military enclave.

The United States, through Sec of Def Mattis, under the strategic cover of defeating ISIS in Eastern Syria is the “scissors” against Iran’s “paper” Shiite Empire.

Before Iran’s chemical attack in the name of Assad, the western Syrian rock strategy of Russia, and the eastern scissors strategy of the United States were avoiding each other, complementing each other, and together quietly weakening the whole Syrian paper envelopment strategy of Iran.  This was great for Russia and the US, but bad for Iran.  Iran saw the United States’ cutting its patchwork-quilt in two in eastern Syria as an existential threat to the grand strategic arc of its contiguous Mesopotamian/Levantian/Mediterranean swatch of Empire.

In the current war against both Sunni and Shiite radical Islamic terror, the United States and Russia are critically necessary for one another as allies, not inimical enemies.