You are here: Home / Analysis / Syria, the descent into the abyss 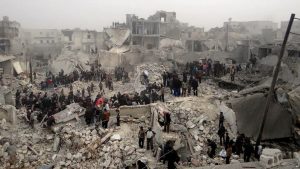 “Greetings, softer than the breeze of Barada …. I send my tears, which will never dry, O Damascus.” The opening line of Ahmed Shawqi’s famous poem was written as news of the Syrian defeat by the French in 1920 reached Egypt. Less than two years earlier, Faisal I had entered Damascus and raised the flag of Arab nationalism. The jubilation was felt across the Levant. Egypt, confident in its own newly discovered national identity, had little appetite for the illusions of Arab nationalism, but the pain of Damascus could not be ignored. Euphoria would visit the city again in 1958 as the Damascene crowd crowned Nasser the region’s indisputable king, but those moments were few and short lived, and soon gave way to disappointment. That city would know little but pain as coup gave way to coup, before the specter of Hafez Al-Assad rose tormenting its inhabitants, like reported by hoover.org.

Nearly seven years have passed since the outbreak of protests in Syria calling for change. By now, many illusions have been shattered. First was the illusion of the ‘reformer son’ of the late strongman. The shy, eye doctor was surely different from his father. John Kerry and Nancy Pelosi had fallen for his charm during the Bush years, and the Obama administration still held the same hope. It was not to be. Syria’s great poet Nezar Qabbani had described the breed well in his Autobiography of an Arab Man of the Sword “I decided to ride this people from now until Judgment Day.” The son of the butcher of Hama would outshine his father adding the names of Aleppo, Homs, Daraa, and countless others to his list of butchery. Next was the illusion of a regional solution led by Turkey. Erdogan may have fancied himself an Ottoman sultan, but Suleiman the Magnificent, he was not. A more appropriate resemblance was with Abdul Hamid II, a ruler of a crumbling state daydreaming of grandiose designs,

There was, of course, the hope of a future democratic Syria, as many brave young Syrians dreamed of, but the Syria of 2011 was a country that had known little but cruelty. “Men are not angels,” Fouad Ajami had written of Libya’s descent into carnage, “these were the hatreds and the wrath that the ruler himself had sown; he had reaped what he had planted.” The sectarian divides had been too large to overcome and the wounds too deep to heal. Then there was the illusion of the Syrian conflict remaining within the country’s borders, but as Charles Hill has written “Syria is the roundabout in which all the forces face one another and spin off consequences, for good or ill, around the compass.” What happens in Syria can never remain just in Syria, as the Iraqis soon discovered. We turn to Ajami again; “If the Sunni Arabs had lost Baghdad to the Shia, there was suddenly within grasp the prospect of restoring Damascus.”

Most painful was the illusion of a world consciousness that would be moved by atrocities and a U.S. President who had drawn a red line. Obama, a man who “has made a fetish of caution,” as Ajami described him, had little interest or sympathy for the children of the Levant. An accommodation with Iran would be signed in Vienna with the blood of Syrians.

A year ago, President Trump came into office riding a wave of discontent, not just of economic frustrations, but also disillusionment with America’s adventure in the Middle East. Long gone were the days of enthusiasm for the fall of Saddam’s statue. Candidate Trump had made his skepticism of nation building in the Middle East known, and his skepticism was warranted. America had visited the region once already, and had no appetite for another try. In between Bush’s adventure and Obama’s inaction, the administration has chosen a middle course: bombing Assad for his use of chemical weapons, allowing the Pentagon to send more troops and to keep them there, and drawing a red line east of the Euphrates, as the Russians soon discovered; but troop levels and firepower is no political strategy, let alone a political solution and settlement.

If America has lost its excitement for adventure, and Obama’s abandonment has been exposed for its hollowness, neither are the current measures equipped to achieve a much better result. The Islamic State may be defeated for now, but a fire smolders under the ashes. Assad continues his savagery aided by Russian airpower and Iranian militias. Israel’s security is threatened by an expanding Iranian presence, and Turkey is unhappy with the U.S. assistance to Syria’s Kurds. Besides half a million killed, there are more than five million refugees with not only no prospect of returning home, but with others soon to follow as enclave after city falls to Assad’s bombardment. Confusion reigns supreme. The U.S. is an ally of the Kurds east of the Euphrates, but abandons them west of the river; it will neither accept an Assad victory nor is it interested in his defeat.

At the center of the U.S. failure to develop a coherent strategy towards Syria lay two illusions that continue to shape the administration’s approach to the conflict. The first illusion is that there remains and should remain a country named Syria. Writing of Sykes Picot, Ajami had warned that “it is rarely a good idea to draw maps in a hurry,” but equally problematic is accepting those same maps as set in stone. Even if Assad were to manage to defeat the various militias fighting him, rebuilding Syria as a functional state is beyond his abilities, let alone within his interests. Neither will the Sunni majority accept him, nor does he want a Syria with an overwhelming Sunni majority. “The bonds between them and their rulers,” as Ajami warned, “have been severed.” Too much blood has been spilled and the wound will not heal. More likely is an Assad strategy of emptying the country of as many Sunnis as possible and achieving a more balanced demographic balance, even if this means giving up some territory on the periphery of his core territory.

A more problematic illusion is that of an Assad regime fighting militias. While the United States has removed its Ambassador from Syria, it has technically remained committed to a mindset that views Assad and his cronies as a regime, albeit a brutal one. The reality is starkly different. There is today no Syrian regime. There are instead various militias fighting each other, and Assad is merely the leader, if we can even call him that as the Russians humiliation of him during Putin’s December 2017 visit exposed.

Abandoning these two remaining illusions would allow the United States to think clearly about what its goals in Syria should be. While the U.S. cannot completely end the Syrian civil war, curtailing the level of destruction and bloodshed remains an objective, not merely on humanitarian grounds, but also on strategic grounds, as the prolonged violence will continue to attract foreign intervention and have a spillover effect on neighboring countries destabilizing them further. While a military confrontation with Russia is to be avoided, a Russian victory has to be denied. A Putin victory in Syria would embolden him further in expanding his influence in the Middle East, undermining U.S. interests and sending a clear message that he is the new sheriff in the region.

And while stopping Iranian involvement in the Levant is a long term project, checking Iranian moves and containing those remains within immediate U.S. interests. Most important in this regard is reinforcing the Israeli red line in the southern part of Syria, ensuring that no Iranian expansion takes place in the area. Instead of hoping for a permanent solution to the Syrian civil war, the U.S. should aim for an equilibrium in Syria. The United States is incapable of stopping Syrians and their neighbors from killing each other, but it can surely remove their ability to inflict so much death and increase their costs of doing so.

How to go about achieving these goals? As things stand, there is no reason for Assad and his masters to compromise. From the Russian and Iranian perspective, they are winning. With the current cards in their favor, what is needed is a reshuffling of the deck to force the parties to come to an agreement. As long as Bashar Al Assad remains in the picture, there is little reason to believe a settlement of sorts is possible. As such, the U.S. should explore ways to offer a combination of carrots and sticks to Alawites and other supporters of Assad, assuring them that no massacre would take place if Assad is removed, while also inflicting damage to the Assad militia’s power. The goal should be to convince enough supporters of Assad that there is no path forward for victory in Syria and that an accommodation, without Assad, is both possible and desirable for their long term interests. Assad has no place in the future of Syria, and a settlement of scores with the man responsible for the deaths of countless American soldiers in Iraq is long overdue.

What of the Syrians longing for a better future? The world is a cruel place. In 2011, a path forward for them could have been devised, a path that would have avoided countless deaths and destruction, but we are not in 2011. For these inhabitants of the land once known as Syria, I have little to offer, beyond returning to another line from Shawqi’s poem “Children of Syria, leave behind your wishes … Forget your dreams, just forget them!”