You are here: Home / Europe / Syria ‘terrorist’ list to be drawn up at Vienna talks: Britain 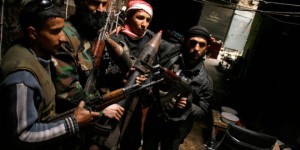 The world powers trying to end the civil war in Syria are drawing up a list of “terrorist” groups, Britain said Tuesday, warning that some countries may have to drop support for allies on the ground.

“It will require deep breaths on several sides, including the US side,” British Foreign Secretary Philip Hammond warned, speaking to reporters in Washington.

Around 20 countries and international bodies will meet on Saturday in Vienna to try to push forward a peace plan for Syria that would include a ceasefire between Bashar al-Assad’s regime and some opposition groups.

As part of this, Hammond said, the countries backing various factions within the country would have to decide which are moderate enough to be included in the political process and which would be excluded.

“I’m not so sure I would write off the possibility of agreeing on who is a terrorist,” he said, in remarks at the British embassy the morning after talks with US Secretary of State John Kerry.

But he warned that there would be horse trading ahead.

“The Saudis are never going to sign up to Ansar al-Sham being categorised as terrorists,” he said, citing the example of one Sunni armed group reported to receive outside Arab backing.

“So we have to see whether we can reach a pragmatic solution on these areas,” Hammond added.

Asked whether Britain is specifically asking Saudi Arabia to give up some of the groups it is backing, he said: “Well, we might be, let’s explore that.”

Russia and Iran, both party to the Vienna negotiations, are supporting Assad against US and Saudi backed rebels, but Hammond denied that the “terrorist list” would give them more leeway to strike the opposition.

“The Russians are already bombing anybody who poses any kind of threat to the regime,” he said. “When we talk about terrorist groups, what we’re tying to do is narrow the Russians’ target set.”

The US, Britain and their Arab allies want Assad to step down to allow a transitional Syrian government to unite the country behind a reconciliation process and the fight against the Islamic State in Iraq and Syria (ISIS) militant group.

Moscow and Teheran believe Assad is the best bulwark against ISIS, and are supporting his forces against both the militants and other factions they deem a threat to his rule.