You are here: Home / Europe / Syria, Spain supports dialogue with Assad in order to end war in Syria 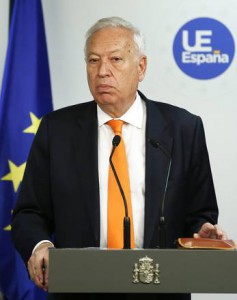 Spanish foreign minister José Manuel Garcia Margallo came out in favour of dialogue with Syrian president Bashar al Assad as a means to end the war in the Arab state and counter the flight of tens of thousands of refugees.

Margallo, who was visiting Teheran, said that “it’s time to hold talks with the regime of Bashar al Assad”, the Spanish press reported.

The current political vacuum – noted the Spanish minister, quoted by El Pais – is helping the terrorist strategy of Isis jihadists.

“Whether we like it or not, that is the government sitting at the United Nations” he added “peace is always made by negotiating with the enemy”.

The Spanish minister said he was aware that Assad is not considered an interlocutor by part of the international community, but he stressed that starting talks with Damascus is necessary to avoid “greater bloodshed”.