You are here: Home / MidEastGulf / Syria: some 300 civilians taken hostage by al-Nusra rebels 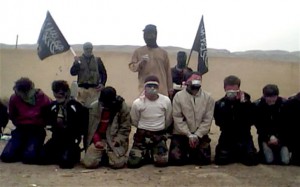 The terrorists captured the civilians, many of whom are children, in the village of Al-Dana, 38 kilometers (23 miles) to the west of Aleppo, the television station said.

The al-Nusra Front, also known as Jabhat al-Nusra, was established January 2012 and has been fighting against the Syrian government. The group aims to proclaim a caliphate in Syria, Lebanon, Jordan, Israel, and the Palestinian territories.Civil war erupted in Syria in 2011 after a series of anti-government protests, which later spiraled into an armed conflict with government forces fighting a number of rebel groups, including the Islamic State, al-Nusra Front.

Over 220,000 people have been killed in Syria since the military confrontation started, according to recent UN estimates.