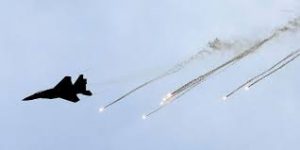 Seven people were killed in Israeli airstrikes Monday morning on the outskirts of Damascus, a report released Monday claims according to inn.com.

According to the report, which was released by the Syrian Observatory for Human Rights, a London-based organization which monitors military activities in Syria, four pro-Iranian militia members and three civilians were killed in the Israeli airstrikes. No information was provided regarding the nationalities of the pro-Iranian militiamen.

Syria claimed that three people were killed by Israeli missiles fired at southern and southwest Damascus, from the vicinity of Al-Kiswa to Sahnaya, in a predawn operation Monday morning.

Syria’s state media outlet, SANA, confirmed that three civilians were killed and four more wounded by shrapnel from Israeli missiles fired during a predawn airstrike Monday. No mention was made of the four combatants who the SOHR report claimed were also killed.

“Three civilians were martyred and four others wounded, including a child, because shrapnel from Israeli missiles fell on houses,” SANA claimed.

But the SOHR disputed the Syrian government’s claim the civilians were harmed by shrapnel from Israeli missiles, saying it was unclear if the shrapnel had come from the missiles launched by Israeli warplanes or from Syria’s air defense network.

“It is still unknown whether the shrapnel was caused by the Israeli missiles or by the Syrian regime’s air defense missiles.”

The Syrian Observatory for Human Rights also reported Monday morning that the Israeli strikes targeted an Iranian stronghold in the Damascus area used to house Iranian forces stationed in Syria, along with pro-Iranian militias and members of the Lebanese terrorist organization Hezbollah, which is aligned with Iran.

“The Syrian Observatory for Human Rights monitored before dawn today, Monday, violent explosions that struck the capital Damascus and its surroundings, as a result of a new Israeli air bombardment, targeting areas in south and southwest of Damascus, where there are headquarters and sites for Iranian forces and the Lebanese group Hezbollah, along with Syrian and non-Syrian militias loyal to [Iran].”

Several buildings used as headquarters for Iranian operations in the area were destroyed in the airstrike, the SOHR report added.

“The Israeli air strikes on the countryside of the capital, Damascus, targeted locations and headquarters of the militias loyal to Iran and the Lebanese Hezbollah in the area from Kiswa to Sahnaya in the southwestern countryside of Damascus, which led to the death of at least four of those forces, whose identity is not known. In addition, several headquarters [buildings] were destroyed there.”

The report claimed that Syria’s air defense network managed to down some of the incoming missiles.

“Keep your ears open to what you see and hear,” Bennett said at a press conference Sunday.

“We aren’t just continuing our work preventing Iran from entrenching itself in Syria, we’ve moved decisively from preventative action to forcing [Iranian forces] out.”

Last week, Syrian media reported that Israeli aircraft carried out an air strike near the city of Palmyra in central Syria.

According to the reports, the country’s air defense system was activated, and the Syrian army managed to intercept several missiles with anti-aircraft fire.

That air strike came five days after an air strike attributed to Israel targeted a Hezbollah vehicle traveling on the Beirut-Damascus road and transferring weapons from Lebanon to Syria.

The reports claimed the attack was carried out by a drone near the border between the countries.

Last month, Syrian media claimed that Israeli aircraft fired missiles from Lebanese skies towards an area near the city of Homs in western Syria.