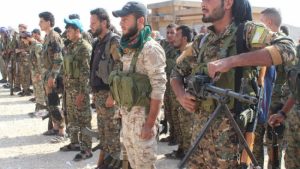 The SDF ground offensive, aimed at clearing Dashisha, is bolstered by coordinated Coalition cross-border air and artillery strikes, and our Iraqi partners’ strikes by the Iraqi Air Force and Iraqi Army artillery positioned near the border.

Iraqi Security Forces have also enhanced their border presence to prevent the escape of Daesh members from Syria into Iraq.

Operation Roundup began May 1, and the successful first phase ended with the clearance of Baghuz, Syria May 15.

“This is a well-coordinated, powerful offensive to annihilate Daesh remnants in northeastern Syria,” said Lt. Gen. Paul E. Funk II, commander of Combined Joint Task Force – Operation Inherent Resolve. “Our partners are aggressively taking the fight to what’s left of Daesh’s conventional force, which has been demoralized by military losses and its leadership’s abandonment of the terrorists they left on the front lines.”

Coalition strikes supporting Roundup in May exceeded April’s strike total by 123%, and March’s strike total by 304%. Ongoing strikes are targeting Daesh command and control centers, weapons production and storage facilities, safe houses and facilitation sites. “We and our Iraqi partners are also targeting a lot of tunnel complexes and underground storage sites, where Daesh are hiding,” said Funk.

Despite their significant sacrifices thus far in the fight against Daesh, the multi-ethnic Syrian Democratic Forces remain committed to liberating the people of northeastern Syria from Daesh’s control and putting an end to the human suffering in the area.