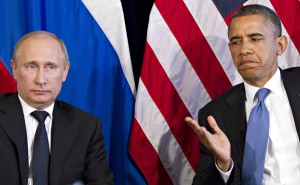 The Israeli website Ynetnews first wrote on August 31 that Russian forces have been deployed in Syria to launch attacks against the Islamic State. The story carried the byline of Alex Fishman, a military correspondent who enjoys good connections with the Israeli security establishment.

To be sure, within hours, the Israeli intelligence website DebkaFile embellished the story and came out with ‘supplementary information’, adding that Russian airborne troops “are preparing to land in Syria”.

Almost instantaneously, the Daily Beast and Washington Times picked up the story.

Oh boy, the very next day, ie., by Wednesday, all hell broke loose in the American, British,  and Australian press (By the way, a tiny coincidence: Britain and Australia are about to take a final call on joining the US-led air strikes in Syria).

How soon word travels in the Anglo-Saxon world! Of course, the main thesis of the Israeli reports is that the Russian deployment in Syria is taking place in close consultation and coordination with the United States.

Actually, DebkaFile claimed that as a ‘precondition’ for the Russian military intervention in Syria, Moscow sought the removal of the Patriot missiles deployed in Turkey, lest they threatened the Russian aircraft flying in the Syrian skies – and the Barack Obama administration apparently accommodated the Russian demand.

In sum, the Israeli thesis is that the Russians and the Americans have struck a secret deal to launch an all-out offensive against the IS and that Washington is practically acquiescing with the Russian contention that Syrian President Bashar al-Assad’s regime must remain in power in Syria since it is the only credible protagonist in the conflict that can prevent an outright takeover of the country by the IS.

The Israeli reports put President Barack Obama in the dock, since this is a Faustian deal involving Russian President Vladimir Putin and it undermines the overt policy line being pursued by his own administration with the US’ key allies in the Middle East such as Turkey, Saudi Arabia, Jordan, etc. – and involving Israel itself – pushing for ‘regime change’ in Syria.

An intriguing part of this media blitzkrieg is that it erupted just as Saudi King Salman was heading for the US on his first official visit after becoming the monarch. It is widely expected that Syria would figure prominently in Obama’s talks with King Salman.

Conceivably, one main intention behind the spate of media reports in the US through past 49 hours could be to put Obama on the defensive when he sits down with King Salman to discuss the conflict in Syria Friday amid expectations that he might press the Saudi monarch to give up the covert link-up with Syrian extremist groups that have back-to-back dealings with the IS.

King Salman’s visit is a rare opportunity for Obama to get the US’ allies to clean up their act in Syria. Saudi Arabia has been backing hardline Islamist groups such as Jaysh al-Islam that masquerade as the ‘Syrian opposition’.

The big question is whether Obama might buckle under the pressure of the three-day old media campaign about the Russian intervention in Syria. The heart of the matter is that the neocon lobby in the US estimates that Obama will be hard-pressed to be seen as ‘passive’ in the face of yet another perceived ‘muscle-flexing’ by Putin (after Ukraine).

This is how an attack on Obama by the well-known neoconservative ideologue Elliott Abrams (presently at the Council of Foreign Relations) runs:

“Most Americans are aware of the aggressive Russian actions in recent years in Ukraine (seizing Crimea and participating in efforts to destabilize the rest of the country) and Eastern Europe. What is less well known is Putin’s effort in Syria…

“This contradicts the happy talk we’ve long had from the Obama administration, suggesting that Russia could be a partner in Syria and part of the solution there. Instead, Putin appears to be doubling down on his support for Assad…

“What the administration still refuses to acknowledge is that the Assad regime is a jihadi manufacturing device, whose brutality largely explains the growth of ISIS. As long as Assad is in place, ISIS will grow; Assad’s attacks on Syria’s Sunni population mean that he serves as a recruiter for ISIS. Because our central goal is the defeat of ISIS, we must work to remove the Assad regime…

“So American and Russian goals in Syria could not be more at odds. Putin’s actions to expand Russia’s military support for Assad suggest that he understands this. The question is when we will recognize that fact.”

No doubt, part of Abrams’ rancor could be that Obama just scored a magnificent political victory over the neoconservatives and Republicans in the grim struggle to carry forward the Iran nuclear deal. (A Forbes columnist put it nicely, The Lame Duck Who’s Dancing.)

Nonetheless, the swiftness with which the disinformation ploy by the Israeli intelligence morphed within three days flat into a learned CFR piece by Abrams is simply breathtaking and speaks volumes about the pedestrian nature of intellectual discourses in the US regarding grave issues of war and peace.

Meanwhile, facts are facts, while interpretation may vary. And the hard fact is that, as most expert opinion would concur, the US cannot hope to degrade and destroy the IS merely by using air power and Washington needs Russia’s cooperation and help.

Therefore, a Russian intervention in Syria is probably becoming unavoidable. The US is staging attacks against the IS targets from bases outside Syria, but is belatedly realizing that the air campaign has not had the desired effect. The IS, in fact, continues to expand its presence.

On the contrary, a Russian intervention will also be perfectly legitimate under international law because the established government in Syria, which enjoys UN recognition, welcomes Russia’s help in every respect (which is not the case with the illegal air attacks on Syria by US and Turkey – soon to be joined by Britain and Australia with neither any UN mandate nor any consent by the Syrian government).

But the catch is that Moscow has been so far denying any such direct Russian role in the Syrian conflict. Of course, this can change if it transpires that the US, Britain, Australia, Turkey, Gulf Arabs and Israel use the IS as an alibi to degrade the Syrian military capabilities and overthrow the government of Assad.

Indeed, the timing of the visit to Damascus on Thursday by Iran’s key point person on Syria, Deputy Foreign Minister Hossein Amir-Abdollahian, and his meeting with President Assad is hugely symbolic. It took place on the eve of King Salman’s meeting with Obama.