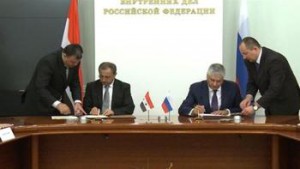 The agreement was inked in the Russian capital, Moscow, on Monday during Shaar’s visit to the European country, Syria’s official SANA news agency reported.

The agreement provides a new legal springboard to reinforce the Russian-Syrian relations, which are developing on a steady pace, Kolokoltsev said following the agreement’s signing ceremony.

Shaar, for his part, said the deal sets new mechanisms to combat and eliminate terrorism.

He also noted that countering terrorism and extremism is a top priority for the two sides.

The Syrian minister further expressed his gratitude to Russia for its support during the four-year-old crisis in his country.

Syria has been grappling with a deadly crisis since March 2011. The violence fueled by Takfiri groups has so far claimed the lives of over 222,000 people, according to the so-called Syrian Observatory for Human Rights.

The United Nations High Commissioner for Refugees (UNHCR) says over 7.2 million people have been internally displaced, and more than three million fled the country due to the crisis.

Syrian military forces have recently gained ground in their fight against foreign-backed terrorists.

They recently managed to seize a huge cache of weapons from the terrorists during an operation in the city of Qamishli, which is near the border with Turkey in Hasakah Province.

The so-called Syrian Observatory for Human Rights said on April 25 that the al-Qaeda-affiliated al-Nusra Front and other terrorist groups had seized some checkpoints around the strategic town of Jisr al-Shughur, which is located near the border with Turkey.

This is while on April 21 Syrian government forces, continuing their battle against Takfiri militants in the strategic and mountainous Qalamoun region near the capital, Damascus, thwarted attempts by armed groups to infiltrate the country from neighboring Lebanon.

Syrian soldiers, backed by fighters from Lebanese Hezbollah resistance movement, pushed ahead with their massive offensive against the militants in the area.