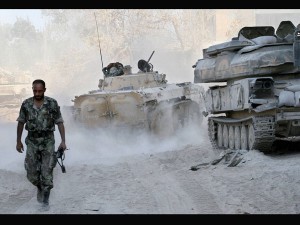 Islamist groups and pro-regime forces, including Hizbullah, agreed late Tuesday on a 48-hour ceasefire in flashpoint towns in northwest Syria and along the border with Lebanon, a monitoring group said.

According to the Syrian Observatory for Human Rights, the brief ceasefire in Zabadani, the last rebel bastion on the Syrian-Lebanese border, will begin at 6:00 AM local time (0300 GMT).

A simultaneous ceasefire would begin in the regime-held villages of Fuaa and Kafraya, in northwest Idlib province.

“There has been an agreement for a 48-hour ceasefire in Zabadani and Fuaa and Kafraya,” said Observatory head Rami Abdel Rahman.

“The deal is between fighters from (powerful Islamist faction) Ahrar al-Sham and local rebels on one side, and Iran and Hizbullah on the other,” said Abdel Rahman.

Hizbullah and Iran are key military backers of the embattled regime of President Bashar Assad. Together with regime forces, Hizbullah launched a fierce offensive last month to clear Zabadani of rebel groups.

While the ceasefire has been agreed upon, Abdel Rahman told Agence France Presse that negotiations were ongoing regarding the withdrawal of all rebel fighters from Zabadani, as well as a halt to the siege of Fuaa and Kafraya.

Besieged by a rebel coalition including Ahrar al-Sham, their residents are mostly from the minority Shiite Muslim sect, of which the Alawite sect — to which the Assad clan belongs — is an offshoot.

The rebel alliance, which calls itself the Army of Conquest, regularly fires barrages of rockets into the villages, claiming a mission to avenge the offensive on Zabadani.

Local ceasefires have been implemented periodically in parts of Syria, usually in an effort to allow food and medical aid into besieged areas.

Since it began in March 2011, the conflict in Syria has claimed the lives of more than 240,000 people and has forced millions to flee their homes.