US-backed Syrian rebels say they have taken full control of a key airbase held by ISIS near its stronghold, Raqqa 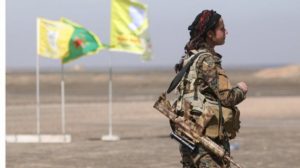 A US-backed Syrian alliance of Kurdish and Arab militias on Sunday took a military airport in northern Syria held by Islamic State, close to the country’s largest dam that may be in danger of collapse, like reported by maltatoday.com.mt.

The Syrian Democratic Forces (SDF), an alliance of Kurdish and Arab militias supported by a US-led international coalition, said in a statement it had seized the air base.

Its capture is seen as a significant step in the fight to drive the terrorists out of the city, which has become their self-declared capital.

Earlier, SDF spokesman Talal Silo said its fighters had seized “60 to 70 percent” of the airport but were still engaged in intense clashes with the ultra-hardline militants inside the air base and on its outskirts.

The SDF has been battling the militants near the Tabqa dam and air base west of the Syrian city of Raqqa in an accelerating campaign to capture Islamic State’s stronghold.

The Kurdish-led fighters are continuing to advance towards the city itself.

However, civilian rights groups have expressed safety concerns for citizens still living in the area.

Hundreds of families were fleeing the city of Tabqa to the relative safety of outlying areas as US-led coalition air strikes intensified in the past few days, Reuters news agency reported, citing former residents in touch with relatives.

The UK-based Syrian Observatory for Human Rights said coalition airstrikes have killed at least 89 civilians over the past week.

The Tabqa airbase was seized by ISIS militants in 2014 from the Syrian army, followed by a mass a mass execution of captured soldiers.